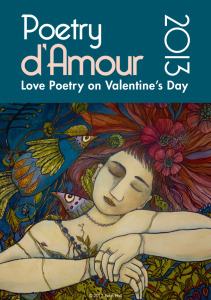 When you organise a show, publicity is the hardest thing to get right, and it seems WA Poets Inc and Fringe World got it right for this event, because it was sold out. About 150 denizens of the planet’s most isolated city, often derided as a philistine mining outpost, paid to see a poetry show. And not just an apologetic $5 cover charge. They paid the kind of money you would expect to pay for an arty theatre show: standard tickets were $35.

What this says to me is that Perth has plenty of people who like poetry enough to pay to watch it. Perth could have poetry shows throughout the year, if its poets muster the energy, confidence and persistence to find venues, book people who can present poems in a way that engages the audience, and promote the shows effectively.

WA Poets Inc are currently blessed with a volunteer, Tineke Van der Eecken, who is not only a full-time jewellery artist and writer, but has a marketing degree.

Here’s something I’ve learned. We need to figure out who our potential audience are, and put ourselves in their shoes. Where do they go, what do they read? Where can we put our message so they’ll see it? What kind of image would appeal to them? How can we make our show look like something they’ll enjoy? As a writer I feel slightly ill having to think this way, but a short catchy name and a strong visual image are probably worth more than any amount of descriptive text.

We could all go get marketing degrees, I guess…nah. I can’t imagine doing that! But I can imagine reading some books on marketing (from the public library, of course!). Maybe I can ignore the cold-blooded money-making win-at-all-costs aspect of it and focus on the skills and how they might apply to my own work.

‘But I’m an ahrtist’, you say. ‘I shouldn’t have to dirty my hands with marketing.’ Well, okay, if you’re content being read only by poets and professors of literature. And I totally agree that your writing and editing should be your priorities. But do you want the public to read and hear your poems, or not? Do you want poetry to have an audience? Tugging at the overlocked hem of the mainstream isn’t going to do it. If we want to make something alternative happen, we have to ignore the establishment gatekeepers and put in some energy of our own. Especially in this town.

Poetry d’Amour was a major effort for the volunteers, five months of work — getting sponsors, organising two support events, and even publishing a book — but putting on poetry shows wouldn’t have to be that much effort every time. It’s worth considering what works for other alternative artforms. For example, the thriving local acoustic music scene may have a huge annual festival at Fairbridge, but they also have house concerts, sellout shows in cafe courtyards… and mailing lists of fans, hint hint. Anyone who buys a ticket can be asked if they want to be kept informed of future events. There are software platforms that make this unbelievably easy.

So how was Poetry d’Amour? Did we give the punters what they paid for?

I’m not about to review my own performance, although it felt like I pretty much nailed it. Performing outdoors to non-poets is my favourite thing. But remember what I said about putting ourselves in the audience’s shoes? Let me think. Yes. Definitely. The lighting was inadequate and the seats were hard, but judging by the clapping and cheering, and all the people who came up to say thankyou to myself, Annamaria Weldon, headliner Candy Royalle (poeming again at Perth Poetry Club tomorrow afternoon), and the many other poets who contributed… I’d say it totally went off.

Well done and thank you to all the poets, artists and musicians, to the stage and venue personnel, to Fringe World, and most of all to Tineke, Gary De Piazzi, Chris Arnold, Neil J Pattinson, Helen Janis, and all the other volunteers, including Jamie Macqueen who livestreamed the show.

Now then. I wonder whether there’ll be any reviews? And whether they’ll be published where our audience will read them?