For those who are afraid, this
is what we are.

Made of spots and threads of light,
it looks like a giant brain, tissue
microscoped. Each neuron, gathered
axons, spot of light, plays
a cluster
of galaxies. Each drift
of connective tissue, teased-out wisp
of dandelion clock, mimes a trace
of dark matter. The scale indicator
reads one
gigaparsec: two billion light-years.
No commentary, no soundtrack.
The great column
of colonies of shining globules and filaments
turns in majestic silence.

For those who are afraid,
this.

The view zooms in: the ship flies closer.
Among the lights, black gaps appear,
spread, become caves
of space, of holding
everything

apart. Gravity
and Light. Play it
again. Listen. Is that
a sussuration? Whispers, waves, pings
along the filaments? What is it?

This.
For those who are afraid.

From A coat of ashes

Watch the videos and read about the Millennium Simulation Project at the Max Planck Institute for Astrophysics.

The italicised phrase in stanza 4 is from the poem “From The Testament of Tourmaline” by Randolph Stow, in The Land’s Meaning, Fremantle Press 2012, p. 147.

As I listened, trying to breathe,
++++the noise separated
I could hear the electrons
++++shocking about in the wires
the liquefied gas gurgling thinly
++++in the pipes
a ringing like a legion of teeny steel hammers
++++beating and beating on teeny steel tubes

It sounded like a mill of miniature machines
++++worked by miniature sweating slaves
The heat exchanger was crammed
++++with tiny miserable elves
They couldn’t get at the food
++++they worked all day to cool
I heard stomachs roaring,
++++lungs gargling, feet shuffling

Many mouths were whispering
++++Many hands began to twist
++++and pull 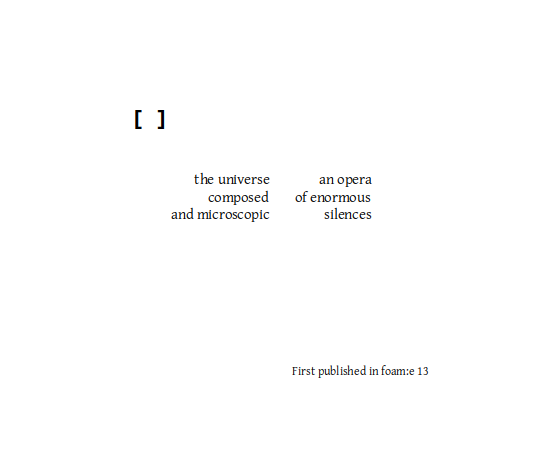 the silence has no colour no temper
and yet is as warm as my blood
according to Husserl, Descartes’
cogito includes not just thinking
as red as my reddest meat
on paper fingers riffle
but also feelings desires
I love therefore
in my throat a clicky gulp
refrigerator snargles and screes
I am if you’re human love is a thing
of the flesh we don’t speak of
its discordant gasmetal anthem
the wide sigh of a car passing
even platonic
love is about physical

From A coat of ashes. First published in The Authorised Theft Papers, the Australasian Association of Writing Programs’ (AAWP’s) 2016 conference proceedings.

The Headless Way, originated by Douglas Harding, is a particular approach to investigating the nature of one’s being.