As Parliament sits in its hilltop house, we spread
our banners out on the steps: CLIMATE EMERGENCY.
PAUSE BREATHE LISTEN ACT. We meditate
there for two hours. Traffic noise like thick smoke
rises from the city below. I hear you say:

some day. Some day, when all these cars are electric,
the city will be so much quieter. We’ll hear the birds —
all the birds, and the small people creeping
in the bushes. Some day, when these vehicles use renewable
energy… No. Not only that! When fewer

vehicles run. When people share, and live
closer — closer to work, closer together,
closer to you — some day, we’ll be able to breathe.
Even at peak hour, the people by the main road,
in the cheap flats, will breathe clean silent air.

in gratitude. Your words seem ridiculous. I don’t know why
I’m writing them down — but in the noise of all these cars,
these petrol, diesel, LNG motors, charging
about emitting, it’s hard to say what’s possible.
So some day… some day… some day. And may it be soon.

First published in Letters To Our Home: Creative Reflections on the Climate Crisis, Follow That Cat Publications 2020
Published on YouTube by The Poetry Archive, 2020

It’s as if they said, three hundred years ago, this
is a house, a flat-sided box with a door
and small plain windows, two storeys
of fired or quarried country,

my country, grey upon brown upon grey,
gathered in patches and swathes
amid the irrepressible green —
the fields, trees, hedges, lawns —

gathered in blocks and rows among the poles,
wires, rails, signs, business buildings in
concrete or ridged metal, the Industrial
Revolution in its birthplace and I in mine,

clutching my BritRail pass (its sleek train
amid the green, its precious printed month)
in long Viking fingers as Viking Saxon
Norman Celtic English, my English,

articulates the air at my Hamlet ears
I hang them with earrings of dark Honister slate,
the rock my grandfather and uncle rived until
the pit closed, the Industrial Revolution

offshoring itself and I its child, clutching—
but British Rail is gone, the network sectioned
like it was in its youth, George and Robert
Stephenson, Isambard Kingdom Brunel

Those names! their everywhere flourish, grey
upon brown upon grey amid the indefensible
green, chimneys cleaving the low sky
the signature of old work

The Aga burns coal in the seventeenth-century
guesthouse, my father born in its front bedroom,
its face of ancient lava plastered
with ivy, its third Mrs Jackson my aunt

My uncle points out his extensions: porch,
kitchen, teashop, looking craggy and venerable
Your grandfather built that garden wall, he says
In the bookshop I read about dry stone walling

for two modest pieces of country, her strata
split and shaped into delicate abstract leaves,
as cool as autumn rain, buffed smooth
in the back room, divided by a silver line

My daughter and I swapped rooms.
Her bed is now in the big room and my mat in the small one.
She wanted the big room to spread out all her things.
I’m sleeping better in the little one because the walls are closer.

I made savoury rice in the large frypan.
I put the leftovers in the freezer for another day.
I watched Escape to the Country.
In the Mystery House the escapees loved the master bedroom’s view.

The brown-haired woman had a nest in the park on the woodchips against a fence.
There was a sleeping bag and a shopping trolley full of clothes.
She was always there asleep in the afternoons.
One time I tiptoed close and left my apple near her sleeping hair.

Yesterday I thought I might leave my banana but I didn’t.
The ground around her was strewn with clothing and packaging.
Today her trolley and bedding and body were gone.
There were bits of cloth on the woodchips. A tampon new in its plastic. 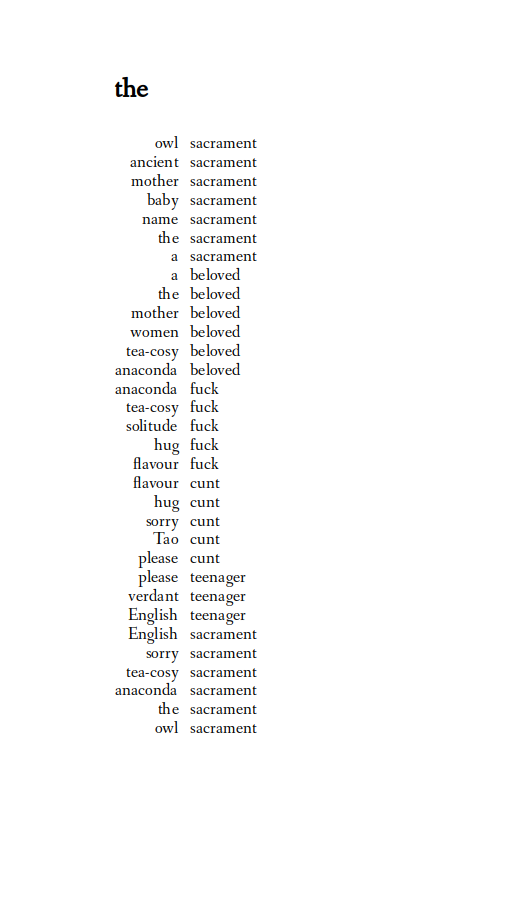